A WhatsApp message from Dean Jones brought news that the Pied Crow, which has been wandering extensively around England and Wales for the last 10 months and which popped up eating sardines in a Clovelly garden yesterday after a 12-day sojourn in Cornwall, had made it to Lundy! Below, a great photo and short video clip from Dean, who said of his subject: "Amazing beast; it's blooming huge!!":

Said amazing beast first appeared in East Yorkshire in June 2018, since when it has been in Licolnshire, Norfolk, Essex, East Sussex, North Somerset, Pembrokeshire, Cornwall and the Devon mainland – though not in that order – see map from BirdGuides below: 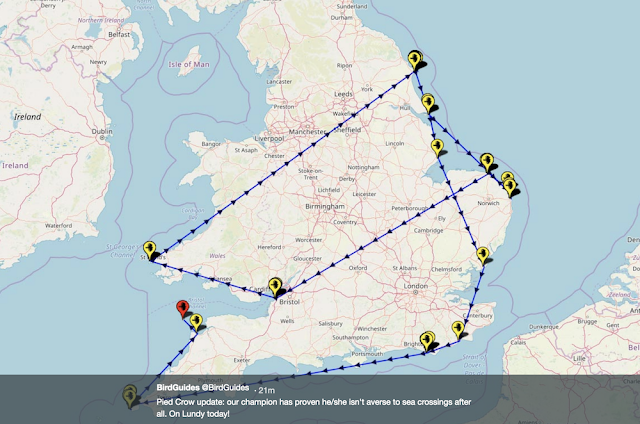 Pied Crow has an extensive sub-Saharan breeding distribution, as shown in the map below from HBW Alive:


Records north of the Sahara, including those in Britain and elsewhere in Europe, are generally considered to be either the result of escapes from captivity, or due to birds hitching a ride on a passing ship. A December 2018 BirdGuides article about the individual that has now paid a visit to Lundy, concluded that the bird's origins "are still clearly up in the air. Showing no obvious signs of plumage wear, and slight peachy feather discolouration when it first appeared consistent with sand-blasting in the Sahara (or further south), it seems worthy of consideration as a ship-assisted or even migrant bird, despite the high escape risk. That said, its confiding nature suggests past affiliation with humans, and it seems unlikely that this long-staying and widely wandering bird will get anywhere near the British list. However, this bird's presence has been widely discussed both in literature and online, and it's arguably surprising that an owner hasn't yet come forward to claim it. Perhaps its origins don't lie in Britain after all..." It will be interesting to see where its next port of call is. Back to Wales, perhaps?

Post-script: The Pied Crow quickly moved on from Lundy and was not seen after about 4pm on the day that it arrived (23 Apr). It cofounded predictions of an onward trip to South Wales, instead choosing to return to the North Devon mainland, where it was seen in Mortehoe on 25th, then neighbouring Woolacombe on 26th, where it was still present on 29th, affording excellent views along the sea front. Photos here and here.
Posted by Tim Jones at 15:00