In the last hour of a 10-day stay on the island, Tim Davis and I were lucky enough to find a Yellow-rumped (Myrtle) Warbler in Millcombe this morning. Back home this evening and this is the write-up we have done for Steve Waite, the Devon County Bird Recorder, and as a basis for a British Birds Rarities Committee submission. This is the first British record since 2003. Sorry that it goes on a bit, but hopefully of interest. Certainly a memorable day for us.

"After a 10-day birding trip on Lundy and with just 50 minutes to go before they had to report for their helicopter flight back to the mainland, Tim Davis (TJD) and Tim Jones (TAJ) decided to have one last look in Millcombe, the sheltered east-facing valley in the south-east of the island. The whole stay had been dominated by strong, mainly south-westerly winds, which reached gale force, gusting higher, during the morning and early afternoon of 27 October. The media-dubbed “St Jude’s Day Storm” passed over South West England in the early hours of 28th, having moved rapidly across the Atlantic from the eastern seaboard of the USA. Given this meteorological set-up, and knowing that a Ruby-crowned Kinglet had been trapped and ringed on Cape Clear on 27th, TJD and TAJ were keenly aware of the possibility of Nearctic landbirds arriving in western Britain, hopefully including Lundy…

We were walking slowly down the northern side of the valley, through an area of trees and scrub sheltered from the still-strong WNW wind, bringing with it hefty showers and sunny intervals. TAJ saw a passerine fly in and perch on a small branch over the path about 8-9m away. Recognizing it immediately from previous experience of the species in North America, TAJ exclaimed to TJD “Yellow-rumped Warbler!”. The bird flew a short distance to the left (north side) of the path, where a series of robust wooden tree-guards protect young (planted) trees. The bird was using these structures as a series of perches from which to forage, both by sallying and periodically dropping into vegetation. The bird flitted from shelter to shelter, gradually moving up the slope. It then alighted on the trunk of a Turkey Oak, working its way up the tree in a series of hops and short flights. It continued upwards onto the main branches of the tree, before dropping back down onto the ground vegetation and tree shelters once more and from there into a pine tree at the top of the slope, pursued by a Robin. At this point TAJ left to try and alert other visiting birders. TJD walked slowly up the slope to stay with the bird.

The bird dropped down from the pine and landed in low vegetation, temporarily disappearing from view. As TJD slowly continued along a small path towards the bird, it appeared sitting on a plant stem holding in its bill a large bluebottle-type fly, which it took some 15 seconds to consume. During this period, the bird was fully side on, giving excellent views at a range of approximately 4-5m. As soon as it had finished eating the fly, the bird flew in front of and away from TJD, over a low hill and down towards the valley bottom, where it was lost from view.

Size, structure and behaviour: Size approximately similar to a Blackcap. Relatively plump-bodied and long-tailed. Moved by series of short hops and sallies when foraging. Direct flight when moving across valley. Considering its trans-Atlantic origins, the bird appeared in remarkable physical shape, with its plumage in excellent condition and its movements agile. It was clearly feeding well.

Voice: The bird was heard to call at fairly regular intervals – a characteristic sharp “chup”, that both TJD and TAJ recognized.

Both TJD and TAJ viewed the bird through 10 x 42 Zeiss Victory FL binoculars. Total viewing time was about 8-10 minutes.

Both TJD and TAJ have seen hundreds of Yellow-rumped Warblers in North America (particularly in Quebec) and in both spring and fall plumages. Both are 100% confident of the identification.

At around 11.40 another visiting birder, Chris Baillie (CB), that we had managed to get a message to, had a brief view of the bird in flight as it crossed to trees on the southern slope of the valley. CB is also very familiar with the species, having lived for some years within the Caribbean wintering area. CB left on the same flight as TJD and TAJ."

Update 1 November: Not seen since we left on 28th October, according to the latest information (mid-afternoon, 1st November) from Lundy Warden Beccy MacDonald. Another Yellow-rumped Warbler was reported on 29th in County Galway, Republic of Ireland, while further North American arrivals at west-coast UK sites from Scilly to Rùm have included American Robin, Mourning Dove (first seen 28th) and Hermit Thrush – all presumably associated with the same weather system that brought the Yellow-rumped Warbler to Lundy.
Posted by Tim Jones at 20:11 No comments:

19 - 25 October 2013
On the island for our usual Autumn visit and although the week started quietly for birds the diversity picked up quite soon. Seawatches from North End and The Castle produced Lundy's highest count of Balearic Shearwaters, 26 in one day, plus Great Skuas, juvenile Black Tern, Little Gull and hundreds of Kittiwakes. A more detailed report will follow in due course.
Other notables included Short-toed Lark, Snow Bunting, Lapland Buntings, Ring Ouzels, sightings of at least three different Yellow-browed Warblers, Richard's Pipit and a Red-throated Pipit (still present on 27th).
The usual migration of lots of Chaffinches and Thrushes didn't really happen with only low numbers as opposed to the thousands of Chaffinches seen most Autumns. Goldcrest numbers were also disappointing with only a handful seen on most days, though a Firecrest in Millcombe did liven things up a bit. Lots of birds of prey with Merlin, Sparrowhawk, Kestrel and of course Peregrine.
A few pictures below: 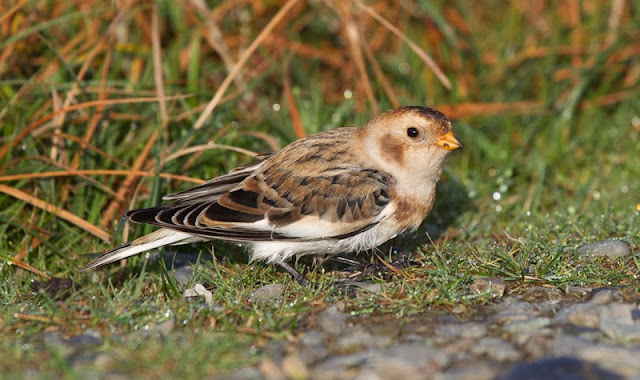 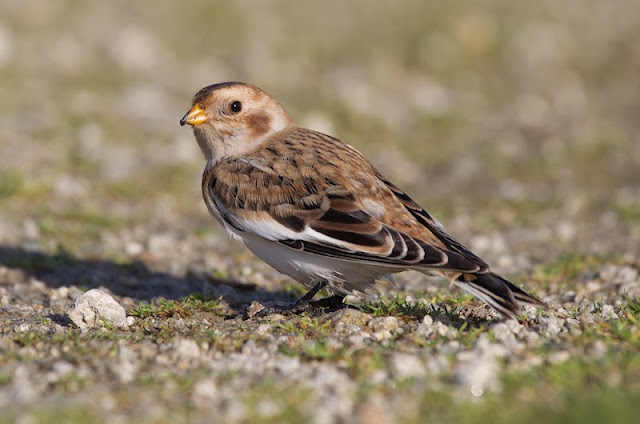 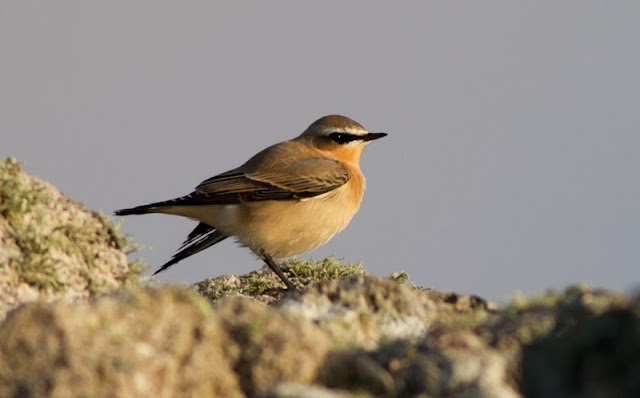 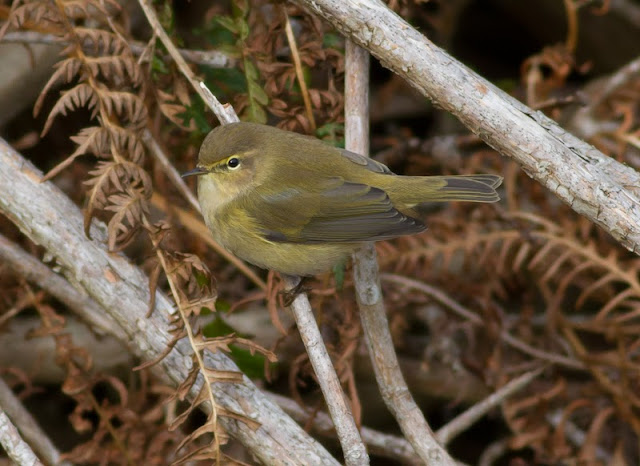 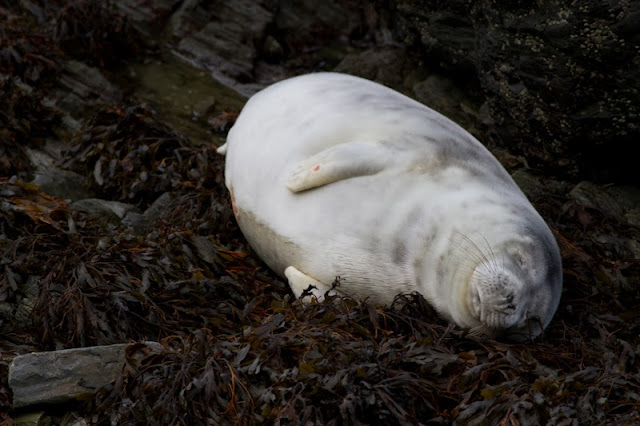 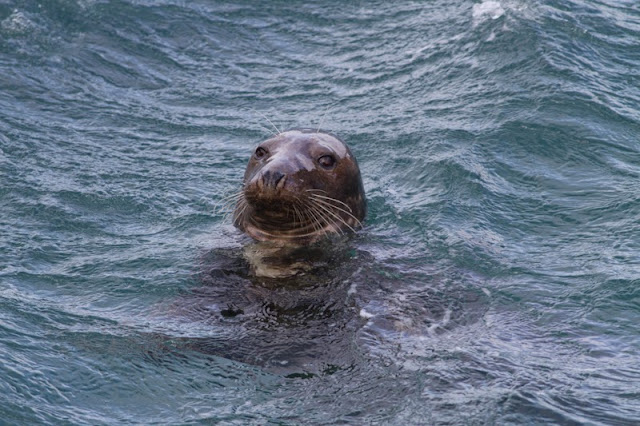 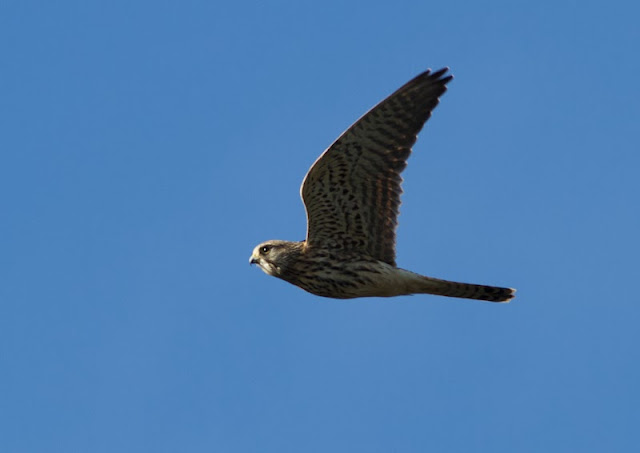 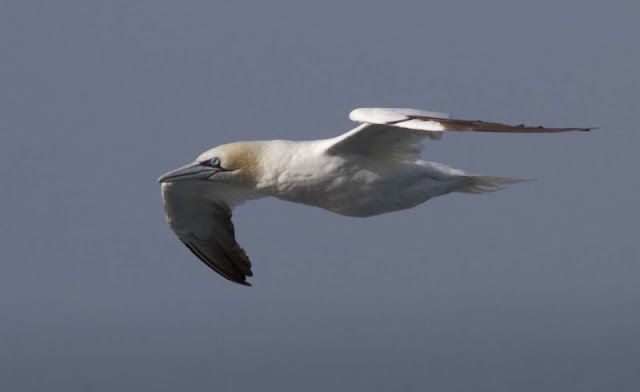 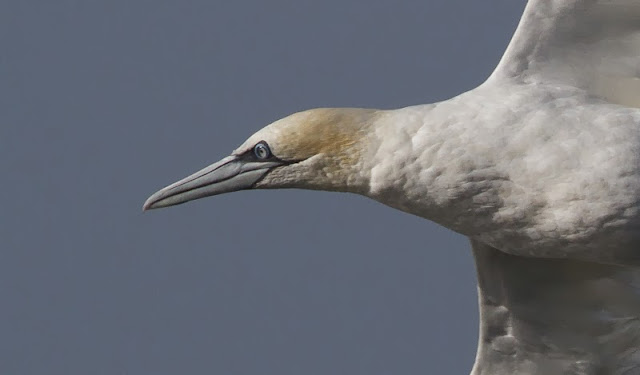 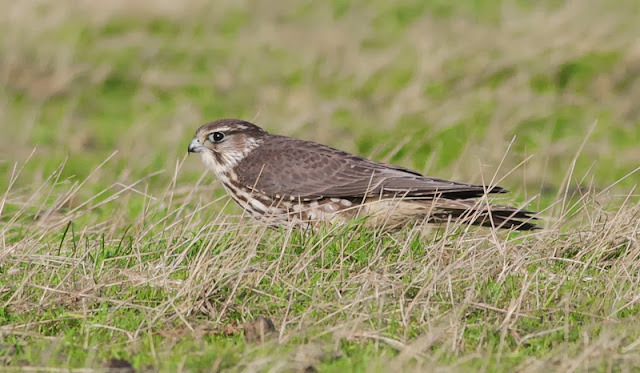 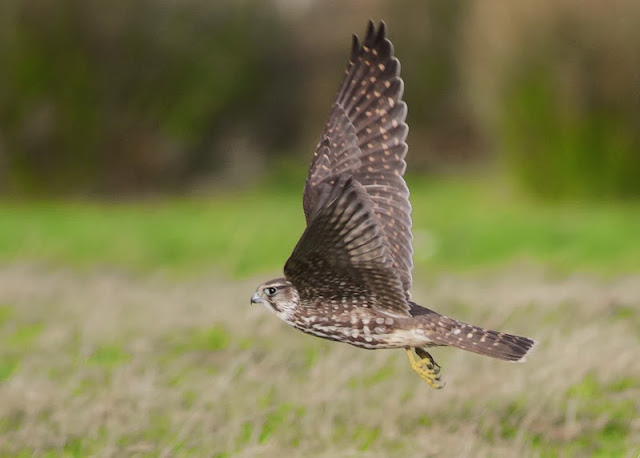 Posted by Richard Campey at 09:52 No comments:

News via Tony Taylor that two Red-breasted Flycatchers were seen today and that some 200 birds (of more usual species!) were ringed on Wedesday (9th) by John Horton and his team.
Posted by Tim Jones at 18:13 No comments:

Sea fog for a whole week hid Lundy from migrants

A team of ringers on Lundy from 21-28 September, led by Chris Dee struggled to catch as many birds as would be usual at this time of year, despite calm conditions. Persistant sea fog and light south-easterly winds for almost the entire week meant very little diurnal migration of Swallows or Meadow Pipits, or if they were migrating they couldn't find Lundy. Highlight of the week was the Wryneck (not trapped) in upper Millcombe and up to two Whinchat in St John's Valley and around the church. Water Rails were vocal in St John's and smelly gully. Four Firecrests were ringed along with three Grasshopper Warblers, and singles of Redstart, Sedge Warbler and Reed Warbler. The House Sparrows seemed to be spending more time in Millcombe than in recent years and Wrens seemed to have had a good breeding season.
Posted by Chris Dee at 13:45 No comments: