Most of the thrushes, in particular Fieldfares, had seemingly cleared out on the night of 25th in the clear, calm evening conditions. Despite this, there were still some Redwings (22) and Blackbirds (16) still kicking about the following morning scattered around various areas of the island. The calm conditions throughout the day also allowed for some diurnal passage, which included small numbers of Chaffinches (31), Goldfinches (5) and Starlings (313) overhead as well as a few Lundy scarcities such as Reed Bunting (one in Windy’s Pig Pen and one at Quarter Wall), Brambling (two in Millcombe) and a beautiful, noisy Snow Bunting (Quarter Wall).

There were also a lone male Blackcap, six Goldcrests and a beautiful Mistle Thrush in Millcombe in the early morning, the latter very showy for five minutes or so before flying south over Castle Parade. In and around Pondsbury there were at least three Snipe and singles of both Teal and Woodcock sulking around the Molinia tussocks.

It was a good day for raptors yesterday too, with Sparrowhawk, Merlin and Kestrel all making an appearance throughout the day, as well as a stunning female Hen Harrier looking for a meal around Tibbetts in the late morning.

Finally, the female Great Spotted Woodpecker was again seen in Millcombe Wood and a Great Northern Diver was busily feeding in the Landing Bay in the early afternoon.

"The strong, bitterly cold easterly winds continued for the remainder of the week which unfortunately stymied most attempts to get out for a good look about.

There have been noticeably fewer finches on the island compared to last week, with only a few Goldfinches and Linnets hanging on in the Village area along with reduced numbers of Chaffinches (highest count for the period was 47 on the 21st). On the passerine front, there have been no further sightings of Blackcap since Tony and Rebecca's visit but there have been a small number of Goldcrests present on most days calling conspicuously from sheltered areas of scrub in Millcombe and along the Lower East Side Path (max 6 on the 21st). Thrush passage has continued, resulting in good numbers of Redwings, Blackbirds and Fieldfares being recorded on most days.

The long-staying female Sparrowhawk and Great Spotted Woodpecker have also been seen periodically, either from the Village area or the now wind-torn Millcombe Valley. Other birds of note within the period included a single Golden Plover heard over the village on 24th; singles of Woodcock (Village) and Snipe (Pondsbury) on 21st; three Water Rails on 21st (two in Smelly Gully and one at Quarters Pond); two second-year Common Gulls in the Landing Bay on 21st; a single Woodpigeon in Millcombe on 25th and an adult Dark-bellied Brent Goose – a Lundy rarity – next to Quarters on 20th."


Entries below for 13th, 16th & 17th Nov have been updated with photos from Martin Thorne.
Posted by Tim Jones at 20:43 No comments:

Tony Taylor and Rebecca Taylor report on their last two days on the island for this trip:

"A windy day, with a little ringing possible in the morning. Limited coverage of the island, and birds keeping a low profile in Millcombe. In the Landing Bay: 16 Gannets, 17 Kittiwakes, six Razorbills, and six Lesser Black-backed Gulls going south together. 85 Herring Gulls mainly hunkered down in Lighthouse Field. Single Sparrowhawk, Kestrel and Merlin. One Goldcrest, one Blackcap, three Stonechats, 24 Redwings, four Fieldfares, two Song Thrushes, 250 Starlings (mainly in Lighthouse Field), 80 Chaffinches, one Brambling (same bird as 17th) and one Goldfinch."

"Extremely windy, and not the weather to be birding in Millcombe. We made it to Quarter Wall and Brick Field ponds. Birds included: two Teal in Barton Field, three Lapwings in Bull's Paradise, and 37 Redwings, 11 Fieldfares, and seven Meadow Pipits in various fields, mainly Brick Field. Also a Blackcap on apples we'd put out at Brambles. During our week we ended up ringing 23 Redwings, 19 Chaffinches, 12 Blackcaps, two Blackbirds and singles of seven other species. Eleven retraps included several Blackbirds."

The latest updates from Tony Taylor and Rebecca Taylor show that migrants are continuing to pass through in good numbers, even though we are now into the second half of November:

The main movements comprised 50 Redwings, 400 Starlings and 120 Chaffinches, with a supporting cast of Sparrowhawk, Merlin, Kestrel, Peregrines (the raptors often targeting passerine flocks in Lighthouse Field), the Great Spotted Woodpecker, a Chiffchaff, nine Blackcaps (with a surprisingly high total of 10 ringed during 15th/16th), a Fieldfare, two Goldfinches and a Linnet. A Great Northern Diver was in the Landing Bay, but a different bird to that seen recently, showing much more white on the head and neck.

Strong winds limited both ringing and birding but a single 20-foot mistnet in a sheltered corner delivered a trickle of birds including a second calendar year Sparrowhawk and a Brambling. Among  birds seen were a Woodcock, the Great Spotted Woodpecker (which Martin Thorne has observed using nestbox no. 5 in Millcombe), a Chiffchaff, three Blackcaps, a Goldcrest, 40 Redwings, six Fieldfares, two Song Thrushes, two Stonechats, 110 Chaffinches and two Linnets.

Photos from 9th to 12th Nov

Below is a selection of photos from Richard Campey's recent brief sojourn on the island...

And finally... we're struggling to see the bird(s) in this photo; possibly a vagrant Oxpecker?

There was little new to report on 14th, although the feeding flock of gulls and other seabirds off the East Side again attracted a Great Skua, whilst Millcombe held two Goldcrests and two Blackcaps. Other records included two Teal and single Snipe and Woodcock.

Thursday 15th brought more movement, with sightings including: individual flocks of 25-30 Redwings, Starlings and Chaffinches heading south, plus single Black Redstart, Redpoll and Reed Bunting dropping briefly into Millcombe during the morning. The valley also held 17 Blackbirds, five Song Thrushes, four Blackcaps, a Chiffchaff and the lingering Great Spotted Woodpecker. There was a Common Gull in the Landing Bay, where the Great Northern Diver was still present, with two Great Skuas further off the East Side.

The south coast of Devon recorded some spectacular thrush migration on the morning of 15th (e.g. 8,400 Redwings over Berry Head in a couple of hours first thing). That movement clearly didn't reach as far north as Lundy – and was also absent from the north coast of mainland Devon. It will be interesting to see if numbers are any higher in the coming days as the wind becomes more easterly.

Today brought a wide variety of migrants, including:
In addition, Martin Thorne saw a large-ish raptor, possibly a harrier or Short-eared Owl, coming in off the sea, mobbed by gulls as it went, when he was fishing from the jetty first thing.

Richard Campey reports (from his last morning on this trip) a Firecrest and six Goldcrests on the Terrace, the Great Spotted Woodpecker in Millcombe, a Brambling in Tillage Field again and 140 Chaffinches, which were "getting hell" from a Merlin and a Sparrowhawk. Tony Taylor and Rebecca Taylor recorded a further 300 Chaffinches moving south during the afternoon.

Richard Campey reports a mostly sunny day with a few isolated but torrential showers. There was no sign of the Little Owl, unfortunately, despite a morning spent searching for it. On top of the island, four Cormorants flew past the Old Light, a Golden Plover was on the Airfield, and raptors made a good showing, with Merlin, Kestrel, Sparrowhawk and Peregrine logged. Chaffinches were less numerous than on 10th, but there were still 200 in evidence in sheltered areas and along the tracks. One Brambling was with Chaffinches in Tillage Field. The Terrace willows yielded two Blackcaps and a Chiffchaff, whilst there were three Stonechats along the Lower East Side Path and two more at Pondsbury. Finally, there was a Water Rail in Smelly Gully and a Redwing flying over the Village in the early evening. 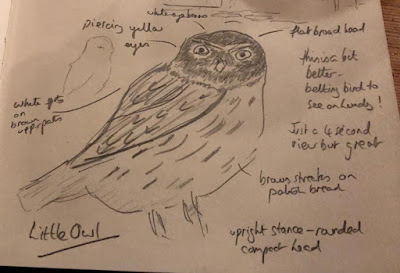 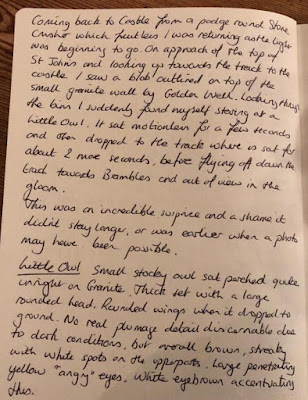 The following update from Ross and Helen Bower brings news of yet another scarcity, continuing the recent run of outstanding birds on the island and the excellent coverage this autumn...

"Just returned from a lovely few days on Lundy. Not overrun with birds (as you would expect at this stage of the autumn), but nice to see a steady passage of thrushes and Chaffinch through the island. Highlight of our trip was a Rough-legged Buzzard on the West Side, north of Tibbetts yesterday afternoon (1 Nov). It appeared from nowhere, was briefly pursued by a Raven before circling up very high and drifting south until lost from view."

31st October:
At least a couple of Brambling overhead within the frequent Chaffinch flocks.
At  least two Merlin around the island, providing much entertainment on their hunting escapades.
One very flighty Snow Bunting recorded briefly on the West Side, south of the Old Light.