Golden Oriole and images of some of last week's highlights

News from the island, via the Lundy Conservation Team's Facebook page, is that a Golden Oriole was seen yesterday, Tuesday 23rd April.

Below are photos of some of last week's highlights from Paul & Helen Bolland and Rachel Shaftman & Jonny Taylor:

Our last day. Superb sunrise into a cloudless blue sky, followed by several hours of pesky sea fog, eventually clearing to wall-to-wall sunshine and little or no wind – one of those rare days when the flag on top of the church hangs limp! Highlights: at least three Yellow Wagtails, including a stonking male feeding in the gullies at Jenny's Cove, where there were 12 Puffins on the water at mid-day. A major movement of hirundines (hundreds of Swallows and tens of Sand Martins and House Martins) began late morning after the fog cleared and birds were still piling through when we left mid-afternoon. Pied & White Wagtails, Meadow Pipits, Linnets and Goldfinches were also on the move. There was a small overnight fall of Willow Warblers (c.50) and Chiffchaffs, and with them at least two Whitethroats and 2 singing Grasshopper Warblers in Millcombe, where there was also a singing male Greenfinch (a sound rarely heard on the island). A fresh Wheatear influx included a number of probable Greenland-race birds. A female Merlin flew N off the Terrace. At around 14.00 an Osprey (that we managed to miss...) flew N along the East Side and was seen by Rob Skeates and Kevin Rylands, among others. A few minutes later, a Common Buzzard (that we did see!) flew over the Village. Both large raptors were pursued – as usual on Lundy – by mobbing gulls and corvids. A great end to an eventful few days.
Posted by Tim Jones at 09:31 1 comment:

Tim Jones reports some 5000 Manx Shearwaters and 1000 Kittiwakes off the island today. Also one Grasshopper Warbler, four White Wagtails, about 50 Wheatears and 200 Swallows. A single Short-eared Owl was present and two Arctic Terns still lingering off the East Side.

From the 16th April

Tim Jones has sent the following records - Tim Jones and Tim Davis on the island for four days. On the 16th Tim reports seeing a breeding plumaged Long-tailed Skua fly past him up through Millcombe, over Government House, past Barton Cottages and then towards Tillage field. Tim also reports many Wheatears and a trickle of hirundines. Also a Common Sandpiper in the Landing Bay. Off the East Side he saw 12 Arctic Terns.

The Long-tailed Skua was also seen later by Tony and Johnny Taylor in Middle Park.

The next day six Arctic Terns still off the East Side and some 150 Kittiwakes with 130 Razorbills. At least one Tree Pipit in St Helen's Copse and a pair of Teal at Pondsbury. No sign of the Long-tailed Skua though.

For pictures of the Long-tailed Skua see this link   https://www.facebook.com/pages/Lundy-Conservation-Team/438541079566390?hc_location=stream
Posted by Richard Campey at 16:55 1 comment:

Chris and Mandy Dee spent 5 days on Lundy, hoping for some Spring migrants after weeks of easterlies, and to do a little ringing.

Arrived late on 9th after spending 2 hours on the Oldenburg anchored in Jenny's Cove waiting for the swell to subside in the Landing Bay. No auks on the ledges, but plenty of Fulmar and Kittiwake activity. Good numbers of Herring and Lesser Black-backed Gulls in the west side colonies.

There were small numbers of Willow Warblers, Chiffchaffs and Blackcaps around on 10th, along with a few Goldcrests. Up to 20 Wheatear south of Quarter Wall and the occasional Swallow and House Martin passing through.

The 11th was a day of mixed weather; low cloud alternating with bright sunshine. A count of 14 Guillemot and 6 Razorbill on ledges at the south end (near Seals' Hole), we the only auks seen ashore all week, but 30 Razorbill and 11 Puffin were on the water in Jenny's Cove.  The skies cleared and winds dropped in the evening, raising hopes that serious migration might start. At least one Manx Shearwater was calling over Castle Hill at night.

A few showers overnight and just before dawn on Friday 12th grounded a lot of warblers on the island. Although there was still too much rain to open mist-nets at dawn, over 100 mixed Willow Warbler / Chiffchaff poured into Millcombe from Castle Hill between 6:30 and 7:00. From the numbers caught later in the morning the ratio of Willow:Chiff was about 3:2. A single flock of 120 Redwing were part of around 200 later reported in St Helen's Field. The flock also included 5 Fieldfare. Later in the morning Goldcrests started to appear in Millcombe; the 34 ringed during the day exceeding most recent Spring counts. There were also good numbers of Blackcaps; mostly males, and almost all that were trapped were in good condition for onward migration. A Firecrest was trapped and ringed and a Grasshopper Warbler was singing in Smelly Gully at dawn.

Most of the migrants had moved on by Saturday, which was again a damp morning, but another Firecrest was ringed. With strong southerlies forecast, the Oldenburg left early curtailing further activities. Despite much searching, the Chough was not located all week and we left feeling slightly short-changed having lost Lundy-time at both ends of the stay.
Posted by Chris Dee at 18:05 No comments:

I've just returned from 9 days on the island from 22nd to 30th March. The weather was dry and very cold with strong easterly winds, but there were plenty of birds to see. Up to 3 peregrines were seen most days on both east and west sides. 40+ razorbills were seen on the 28th off the east side. A grey heron flew over the island on the 23rd and was seen again on the 26th at Rocket Pole pond. The sheep field near the Tavern produced a number of sightings with numerous wheatears, meadow pipits, pied wagtails, crows and robins, a song thrush on the 30th, a little ringed plover on the 26th and 29th, and the solitary chough which fed regularly in the sheep field and then usually flew off towards Old Light/Rocket Pole where I also saw it feeding on the west side before it flew back to the village area. 40 or 50 plus skylarks and meadow pipits were seen on the top of the island. Up to 3 gannets were seen close to the east side on most days. A male stonechat was seen on the east sidelands on the 23rd, 24th, 27th and 28th. Finally a goldcrest was seen on the 26th near Millcombe House. 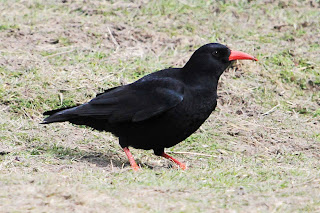 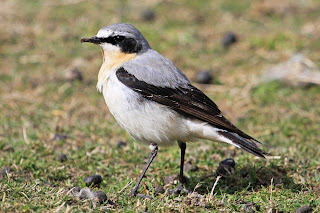 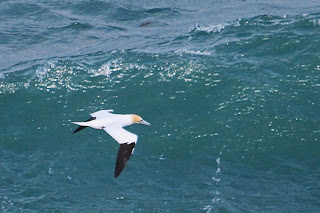 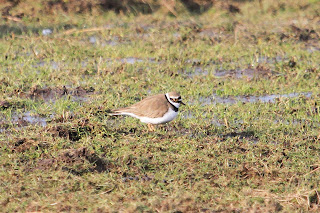