Friday 11th Nov: Great Northern Diver 1, Lapwing 2, Redwing 70, Blackbird 25 (including a group of 14 passing up through St John’s and onwards), Fieldfare 20, Brambling 1, Chiffchaff 1, Siskin 2, Skylark 7 in over Landing Bay and heard throughout the morning, and a small passage southwards of some 200 Chaffinches.

Unless there are further regular birdwatching visitors to the island between now and the end of the year, this is likely to be the last report of 2016. Thanks to everyone who has either uploaded photos and reports, or has sent texts and photos for uploading.
Posted by Tim Davis at 17:26 No comments:

Richard & Rebecca Taylor began their five-day stay on 7th (effectively a half-day after their arrival by helicopter from Hartland Point) with a Firecrest, a high count of ten Snipe, three Woodcocks, three Chiffchaffs and three Blackcaps.

Given Richard's opening comment ("Hello. It's a bit windy!"), it seems unlikely that they have been able to open the mist-nets. With calmer winds on Wednesday (9th) the chances look better... but less so on Thursday (10th)!
Posted by Tim Davis at 14:06 No comments:

Fieldfare - all over the island, this one in Lighthouse Field 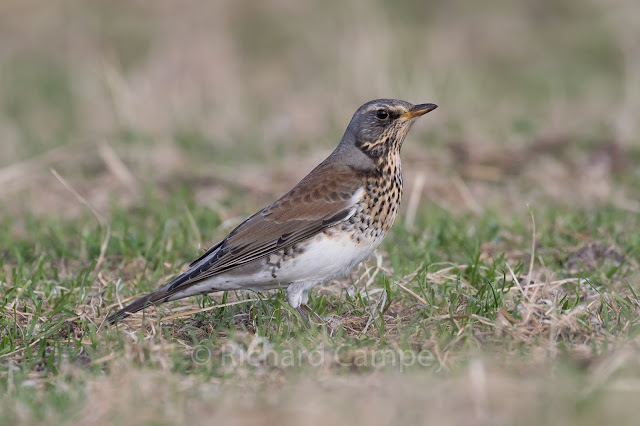 Another Fieldfare in the top of Millcombe 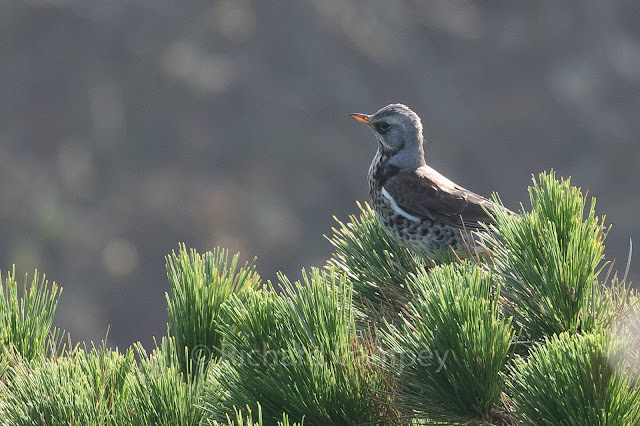 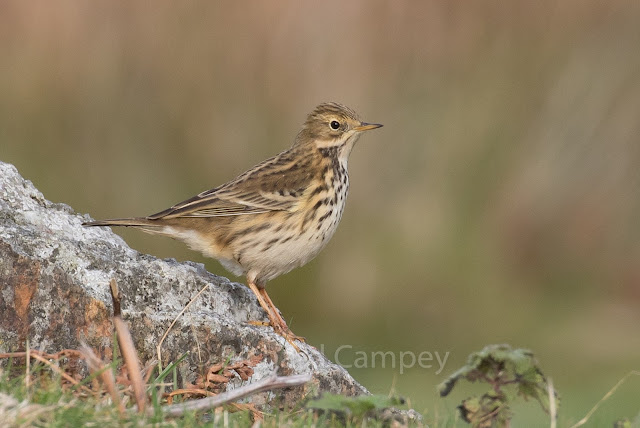 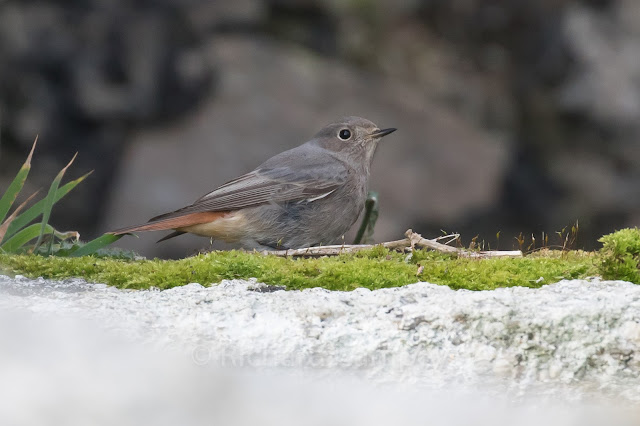 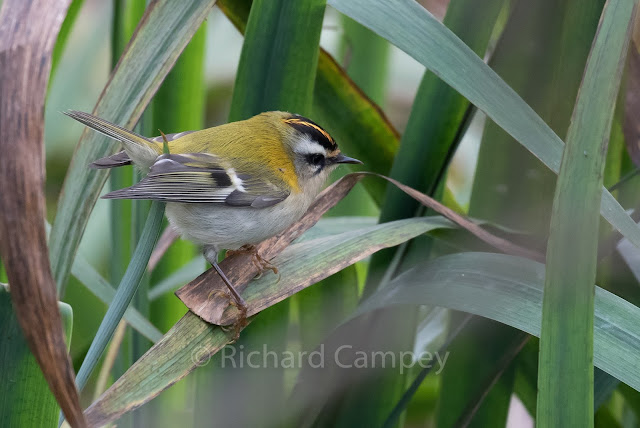 Kestrel seen flying through Millcombe from The Ugly 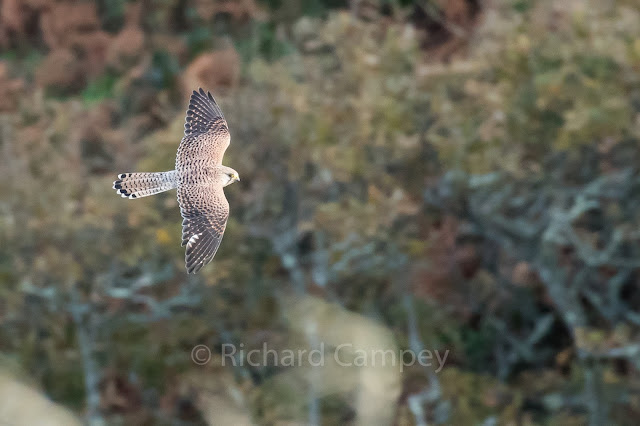 Redwing in Tent Field living up to it's Latin name ! 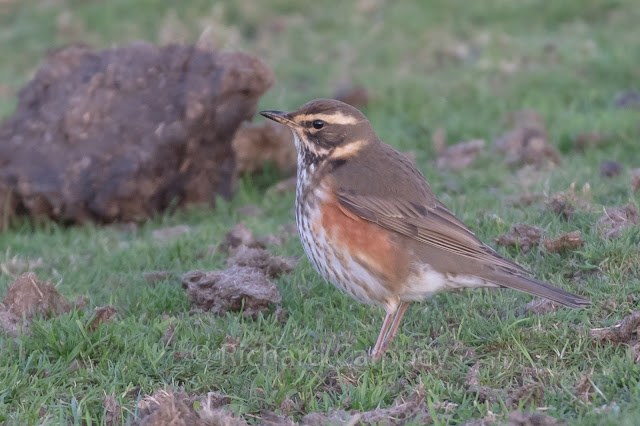 Posted by Richard Campey at 17:20 No comments: 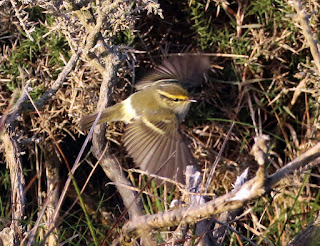 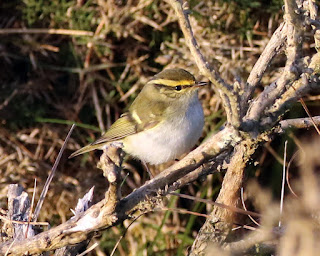 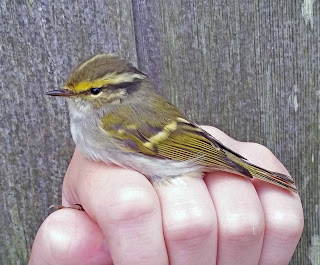 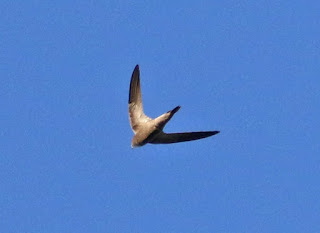 The last of our five days and a very different one, waking to a heavily overcast sky, a southwesterly airflow and light rain. Little in the way of movement through the island detected but in the few hours available to us before boarding the helicopter to Hartland Point, James, Richard and I recorded – all in or from Millcombe – one Brambling (flight call only), a handful of Blackcaps, a calling Water Rail in Smelly Gully, four Siskins, two Firecrests showing very well in the Sycamores above the Casbah, 30 Starlings perched on the Church, a Stock Dove, first seen arriving in Millcombe wood late the previous day, one Woodpigeon, a Merlin flying from near the Sugar Loaf to South Light, and a Great Northern Diver out in the Landing Bay. James also had early-morning views of the Yellow-browed Warbler first seen late on Thursday afternoon, but sadly it eluded us thereafter.

The much better than average coverage of birds on Lundy this autumn continues next week with the arrival on Monday of Richard & Rebecca Taylor, so continue to watch this space!
Posted by Tim Davis at 20:44 No comments:

On their last full day on the island, Tim Davis, James Diamond and Richard Campey finally caught up with a Yellow-Browed Warbler late in the day in Millcombe, where there were also 2 Firecrests, 8 Goldcrests and 6 Blackcaps.

With the change in wind direction to the south-west, gulls were much further offshore, but a single Black-headed Gull, 6 Common Gulls and 5 Mediterranean Gulls were detected.

Elsewhere there were 2 Jack Snipe, 2 Woodcock and 8 Common Snipe. A Stock Dove was seen and there were 2 Kestrels, a Merlin and 5 Stonechat. Only 190 Starlings were counted but there was still some thrush passage with 40 Blackbirds, 40 Fieldfares, 25 Song Thrushes and 200 Redwings. Finches were represented by 350 Chaffinch, a Brambling and a Lesser Redpoll.
Posted by Chris Dee at 21:51 No comments:

Tim Davis reports a Teal on Pondsbury on both 1st and 2nd November and a male Shoveler on the 2nd - only the 13th Lundy record and the first since 2010. James Diamond located 4 Jack Snipe in the Pondsbury area on the 1st when there were also 4 Lapwing on the Airfield. Also on 1st was a flock of 10 Oystercatcher on the rocks at low tide on the West Side, 6 Snipe, a Kestrel, 2 Merlin, a Sparrowhawk and 3 Common Scoter. One Merlin was still present on 2nd. Three Golden Plover were seen on the 2nd and in an hour's count 25 Black-headed Gulls, 25 Common Gulls and 14 Mediterreanean Gulls were tallied.

Thrush numbers continue to be impressive with at least 50 Blackbirds, 25 Song Thrush and 125 Redwing on each day, 100 Fieldfare on 1st and 150 on 2nd, a Mistle Thrush on 1st and 2 Ring Ouzels on 1st and one on 2nd. The Starling flock was counted as 550 on 1st and on the same day 7 Black Redstarts were seen. Eight Stonechats were reported on both days.

On 2nd there were counts of 18 Goldcrest, 1 Firecrest and 13 Blackcap. Finch passage is building up with 350 Chaffinches passing through on 1st. There was a single Snow Bunting on 1st and 3 a day later, when a Lapland Bunting was also located.

In the mild conditions, two Red Admirals and a Small Copper were on the wing.
Posted by Chris Dee at 08:12 No comments:

Tim Davis, who is on the island with James Diamond and (un-beknown to them in advance) Richard Campey, report a huge feeding flock of gulls on the East Side, spreading from the Landing Bay to Gannet's Coombe. At around 12:50 the flock included 400 Kittiwakes, 200 Herring Gulls, 6 Common Gulls, 3 Black-headed Gulls, a few Great Black-backed Gulls, a Lesser Black-backed Gull and a Great Skua. Most notable though was the presence of six adult Mediterranean Gulls - the largest ever Lundy count of this species - and well overdue considering the number that winter on the nearby Devon mainland and in southern Ireland.
Over the island there was good thrush passage, with counts of 200 Redwing, 50 Fieldfare, 15 Song Thrush, 25 Blackbird and a Ring Ouzel. Strong Chaffinch migration amounted to at least 500 birds. A flock of 700 Starling were feeding in South West Field. Elsewhere, five Water Rail were reported (3 in Millcombe and 2 at Pondsbury), a Jack Snipe was flushed from the Upper East Side path and three Lapwing were on the Airfield. A female Sparrowhawk and a Merlin were present.
Sadly there was no sign of any Yellow-browed Warblers or the Pallas' Warbler, but six Chiffchaffs were present.
Posted by Chris Dee at 05:54 No comments: