Tony Taylor reports that the 11 Tree Sparrows were still present today, along with a single Swift battling into the strong SE wind and a Little Stint.
Posted by Tim Jones at 22:26 No comments:

Tim Davis, Tony Taylor, Richard Taylor, Mike Jones, Martin Thorne and Annie Alford were all on the island today and saw up to 11 Tree Sparrows on the main track between the stonecrusher gate into SW Field and Old Light. The flock was quite flighty, being frequently disturbed by non-birding day-trippers, but always returned to the same general area. A few of Tim's photos are below. Tim also reports a Whinchat (on juncus and the fence-line around Quarters pond) and a juvenile Yellow Wagtail (next to and on top of the water tanks). Annie saw six to eight late Swifts over the High Street outside the shop – a very good count for so late in the month. There was no sign of the Rose-coloured Starling. 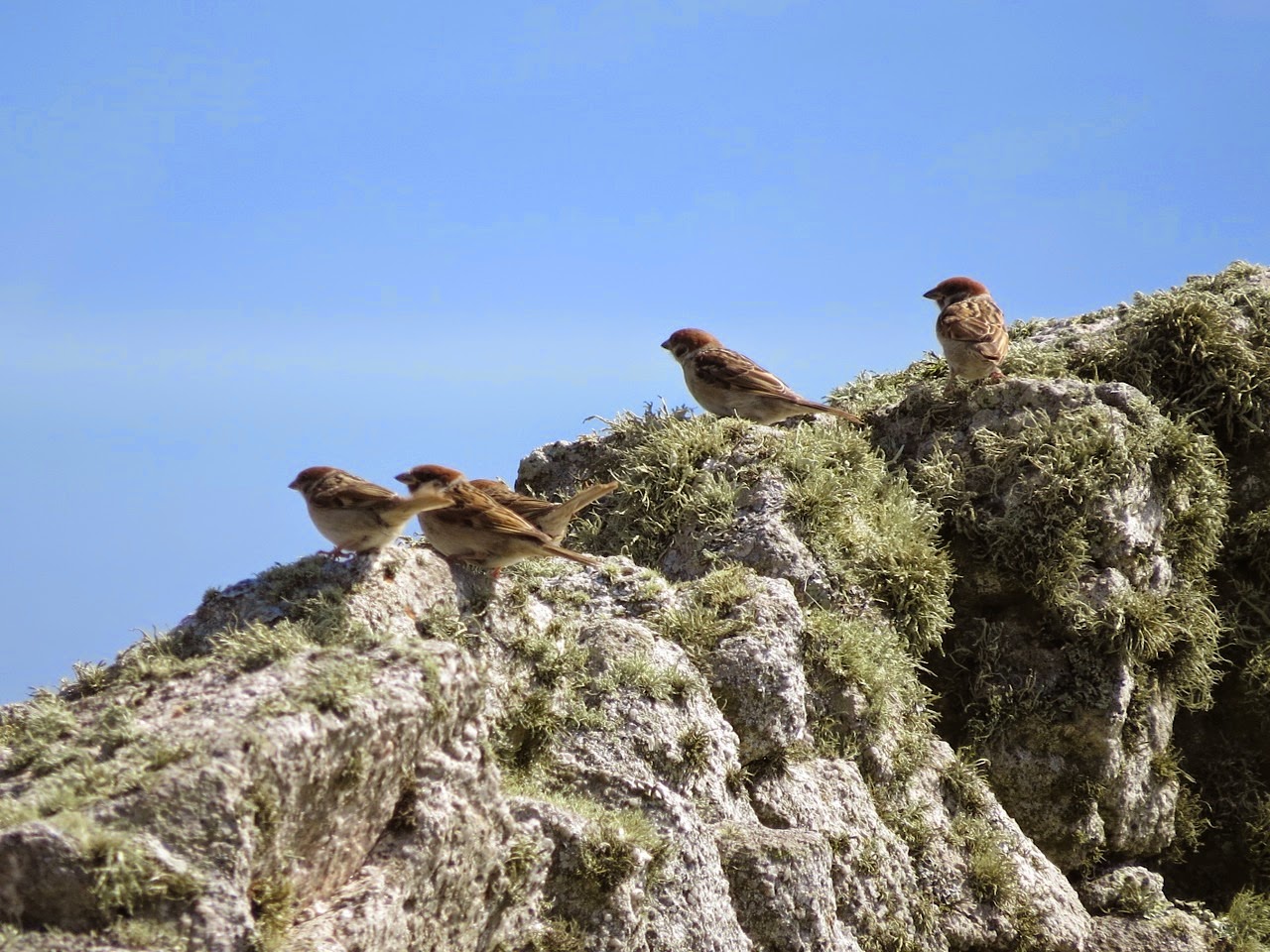 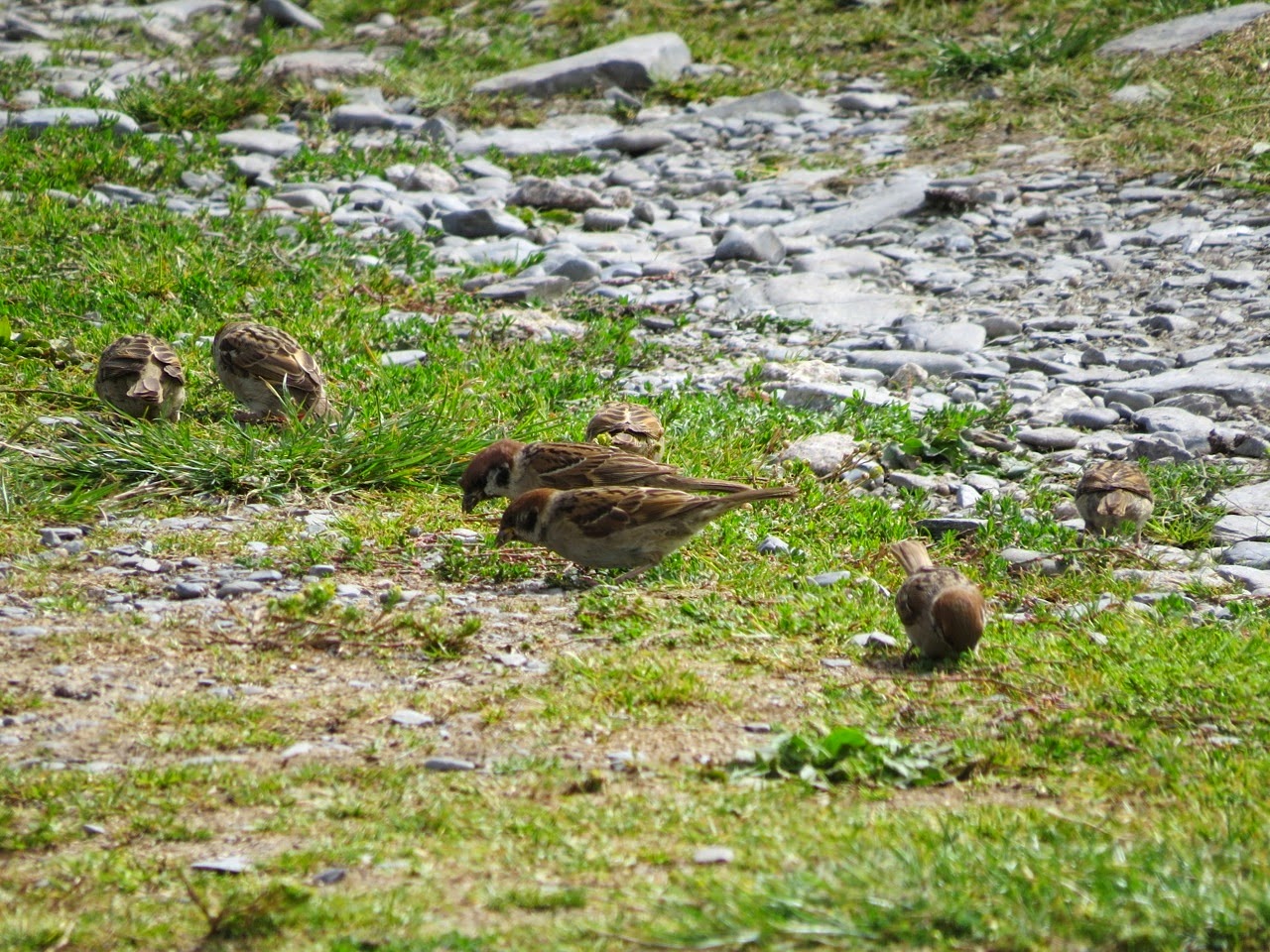 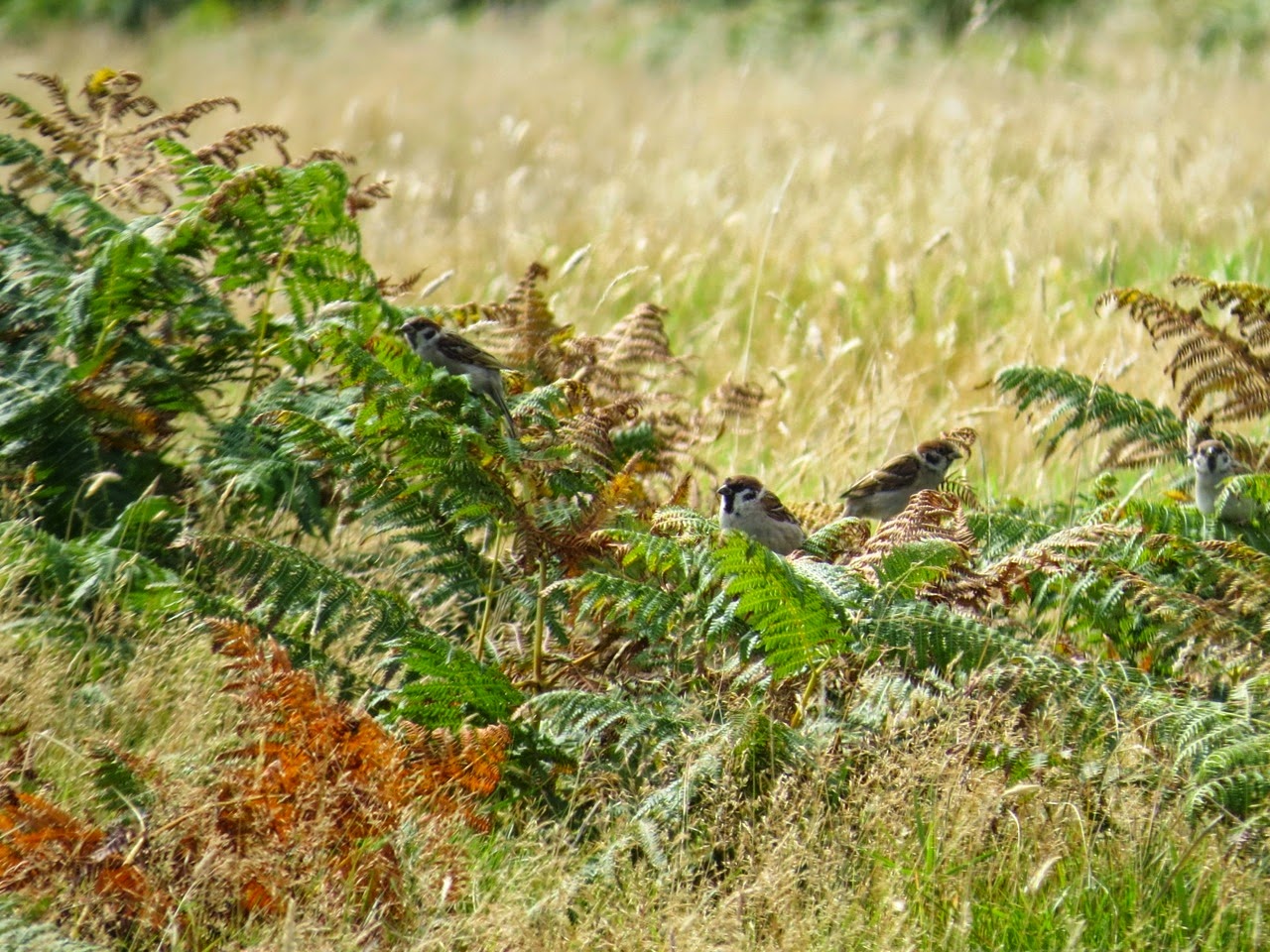 Tony & Richard report that the flock of Tree Sparrows has increased to 12 – seen on the track near the Brick Field this morning. Having now checked the record books, I can confirm that these are the first Tree Sparrows on Lundy since 2000 (though there was an unconfirmed report of one in early August 2008). A glance at Bird Atlas 2007–2011 shows that while range and numbers have decreased dramatically over most of southern England and Wales, they have increased substantially in eastern Ireland. With north-westerly winds having dominated over the last couple of weeks, Ireland may be the most likely origin for this remarkable influx.
Posted by Tim Jones at 18:03 No comments:

The juvenile Rose-coloured Starling was around the farmyard today and at least one Tree Sparrow was with House Sparrows near the lambing shed. Also small numbers of juvenile Willow Warblers everywhere we looked, including three or four in and around the pig-sty next to the Tavern Garden and Wheatears much in evidence. Other birds included a Blackcap in Millcombe and three Sand Martins hawking low around the South End, while six Ravens and single Cormorant and Kestrel also put in appearances off Benjamin's Chair. Outward crossing almost devoid of birds, but return crossing brought good numbers of Kittiwakes and Manx Shearwaters close to the island and two 'winter'-plumaged Razorbills. Also Harbour Porpoise and three Bottle-nosed Dolphins.

A veritable FLOCK of... Tree Sparrows

Rather astonishing news from Tony Taylor & Richard Taylor is of an actual flock (if three constitutes a flock) of Tree Sparrows in the area between the Black Shed and the old stonecrusher. This appears to be the largest number seen on the island – of what is now a very rare bird for both Lundy and mainland Devon – since nine in May/June 1978.
Posted by Tim Jones at 23:30 No comments:

Tony Taylor & Richard Taylor, currently on the island to ring shearwater chicks, report a juvenile Rose-coloured Starling around the farmyard.
Posted by Tim Jones at 10:37 No comments:

The highlight of today's trip was an Osprey drifting south, just offshore, as I walked along the Tillage Field wall on the Upper East Side Path. I heard callling gulls in the distance and looked across to see masses of them in the air over towards Pondsbury. I scanned around for a possible raptor, but couldn't see anything. Then a gull started alarm-calling much closer to me and I glanced up to see the Osprey coming in from the north and flying straight past me! It maintained a constant south-bound course, over the Landing Bay and Lametor and on towards Hartland Point, only flapping its wings when it circled upwards a couple of times (already well south of Lundy) to gain more height, before disappearing as a distant speck on a heading just east of Hartland Point radar dome.

Another nice bird to see was an adult Common Tern flying around the Landing Bay and Rat Island as we stood on the boat waiting to sail at the end of the day. Other migrants during the day included five Willow Warblers, two Chiffchaffs, three Whitethroats, a Blackcap and a Spotted Flycatcher. Alan and Sandra Rowland also picked up a Kestrel.