A Common Rosefinch, found in Millcombe yesterday morning by Philip Lymbery, was still present today, Saturday 30th May. Four Storm Petrels were seen on the boat crossing from Lundy to Ilfracombe this evening,
Posted by Tim Jones at 18:53 No comments:

28th May – Northern migrants drop in

The Grey Heron remained, while two Golden Plovers were the most notable new arrivals, along with two Greenland Wheatears that were trapped and ringed.
Posted by Tim Jones at 10:41 No comments:

The latest news from Tony is of a Grey Heron and two Dunlins on Wednesday 27th May, which was also notable for an entertaining encounter between the long-staying Black Guillemot and a Lesser Black-backed Gull. The Black Guillemot was "making aggressive postures at the gull and being ignored, till eventually the guillemot marched up to the gull, which flew off. The guillemot was finally able to settle down on top of its favourite rock and enjoy the morning sun."
Posted by Tim Jones at 17:53 No comments:

A further update from Tony reports that in spite of the cool NW wind Swallow and Sand Martin passage continued on Sunday 24th & Monday 25th, though numbers were considerably reduced, with c.60 Swallows and just a handful of martins. A Dunlin and a Stonechat were seen on 25th and a Turtle Dove was still present. Clearer nights with a waxing moon meant that it was too bright for many shearwaters to risk coming ashore. A lot of Wheatear nests are still at the egg stage, meaning that adults are relatively inactive, so opportunities to add to the number of colour-ringed adults (see post of 28th April), or to observe already marked birds and track them down to specific nest sites, have been limited. There should be a big increase in activity once the young have hatched and need to be fed...
Posted by Tim Jones at 17:46 No comments:

22nd to 24th May – Shearwaters and hirundines headline

A text from Tony Taylor on Sunday morning, reported low cloud sitting across the island, with the cloud base down to 'Smelly Gully' in lower Millcombe... The night of Friday 22nd/Saturday 23rd saw similar conditions which were ideal for Manx Shearwaters to come ashore in large numbers. Tony and team caught (by hand) 33 new birds and eight from previous years.

Fine weather on 23rd saw hundreds of Swallows still passing through, along with a few House Martins and Sand Martins. Other migrants included Turtle Dove and up to three Spotted Flycatchers.

The Black Guillemot was still present, sitting on a rock in the Landing Bay early on 24th.
Posted by Tim Jones at 13:20 No comments:

Tony Taylor, who arrived by helicopter on Tuesday 19th – the scheduled sailing of MS Oldenburg having been cancelled that day due to rough seas in an unseasonably strong westerly – reports things to be "quiet" so far birdwise. In addition to the Black Guillemot that continues to frequent the Landing Bay, highlights have been limited to single Whimbrel, Yellow Wagtail and Reed Warbler. Among potentially breeding landbirds, Blackcap, Chiffchaff, Whitethroat and Sedge Warbler have all been heard singing, while Tony's continued ringing studies of the growing Lundy shearwater colony have included the retrapping of a Manx Shearwater originally ringed as a chick on the island in 2007. This makes it among the older of the known 'Lundy born & bred' shearwaters, following the eradication of rats in 2004.

Alan Rowland, who together with other Lundy Field Society members helped out with the Landmark Trust's 'Golden Weekend' 50th Anniversary celebrations (16th/17th May), adds that a Cuckoo was heard calling near Felix Gade's Memorial (and elsewhere aound the island) and that a dead Gannet was washed up in the Landing Bay; apparently the third such recent occurrence.
Posted by Tim Jones at 15:09 No comments:

Thanks to Chris Baillie for this update on bird highlights from the A Rocha 'Wild Lundy' week that came to an end yesterday, Saturday 16th May.

A Little Egret flying south off the East Side on 11th was followed by 2 resting in Jenny’s Cove on 13th. A Turtle Dove on 10th was thought probably the same individual seen on 13th and 16th. On 12th the Black Guillemot was off the Sugar Loaf, relatively far out from the island. In addition to the 2 Little Egrets, the 13th was notable with a strong passage of Swallows and singles of Hoopoe, Golden Oriole (considered a 1st year male), Whinchat, Redstart, Bullfinch (superb male) and Wood Warbler. The day was rounded off with 15 Great Skua flying north together well out from the West Side. Two recurring colour-ringed Kittiwakes were noted (AV now 16 years since being ringed). Birds singing throughout the week included Blackcap, Chiffchaff, Willow Warbler and Sedge Warbler, but it was not evident that any of this involved continuous residence by any individuals. At least two pairs of Goldfinch were supplemented by other birds. Spotted Flycatcher was recorded daily, with a maximum of 5. Puffin maximum count was 75, but this was clearly less than the actual number. The sea seemed generally quiet with few Gannets (some porpoises but no dolphins) and auks etc. apparently feeding mostly well away from the island. Plenty of Manx Shearwater activity at night.
Posted by Tim Jones at 23:13 No comments:

News from the past few days includes a Hoopoe in Millcombe on 13th (at least – and possibly more than one), with a supporting cast of other migrants, including Turtle Dove, Sedge Warbler, Whitethroat, Spotted Flycatcher, Redstart and Dunlin. Manx Shearwaters have been giving impressive demonstrations of their unique vocal abilities, with those visitors staying at the campsite enjoying the full-on Manxie experience.
Posted by Tim Jones at 10:45 No comments:

This morning was my first visit to St Philip's Stone since 22th April (after a lovely holiday in North Cornwall). The light SE winds allowed me to try the telescope/video combination on my provisioning survey ledge. At least two of my Guillemots have eggs: 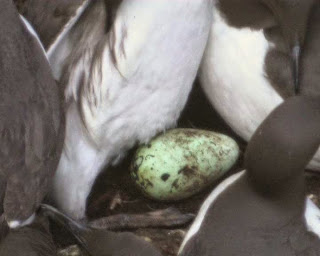 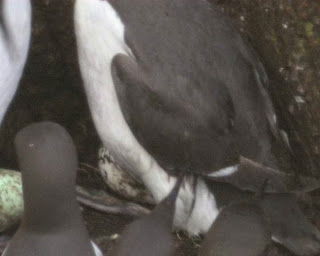 Based on their behaviour, another 8 or 9 pairs may have eggs.
Posted by Unknown at 17:15 No comments:

Highlights of the Devon Birds day-trip on Sunday 10th May included a Golden Oriole and two Turtle Doves. For further information and photos, see Brian Thompson's entry on the Devon Bird Sightings page of the society's website. Additional photos and comments posted on Twitter by Lee Gardiner @urban_birding.
Posted by Tim Jones at 09:41 No comments: