12 Guillemot chicks on my Provisioning ledges

I'm getting lots of video from my Guillemot provisioning ledge at St Philip's Stone. 12 chicks have hatched so far, an another two pairs may produce a chick before the end of the season. My new computer should be delivered soon, more pictures when I can process the video... 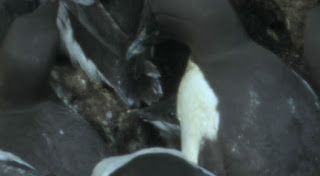 Our last two days on the island for this trip... The 15th saw the Stock Dove, Grey Heron and two male Cuckoos remaining on the island, a Cormorant (surprisingly scarce on Lundy) and a handful of Swallows (15), House Martins (4) and Swifts (7) passing through, and the female Teal still accompanied by four ducklings.  A female Mallard led a late brood of freshly hatched ducklings past the helipad just before dusk on 15th.  We did not see the Rose-coloured Starling again (note photo below is from 14th), but did not search thoroughly for it.  Good numbers of Red Admirals and Painted Ladies were seen once again, with totals of 51 and 48 respectively entered in the log.  Also a Hummingbird Hawk-moth near Stoneycroft.

Moth-trapping on the night of 15th/16th brought an interesting array of species, including an L-album Wainscot, two Northern Rustics, Mullein Wave and, surprisingly, a Red Admiral, suggesting that some migrant butterflies are still active at night.  Eight Common Dolphins were close in off the South End during the evening of 15th, with a few attendant Gannets and Kittiwakes.

On 16th, both Cuckoos were still around the Millcombe/St John's area.  Also in Millcombe were a sub-singing male, possibly territorial, Blackcap, a Spotted Flycatcher and a Chiffchaff gathering nesting material, while a Sedge Warbler was sub-singing at the mouth of 'Smelly Gully'.  The Stock Dove was still around the Farm.  At Jenny's Cove there were not many Puffins to be seen on either land or water, but two Swallows whipped through, showing that some migrants are still heading north, while others, such as non-/failed breeding waders, will be heading back south any day... A few 'record shots' follow below. 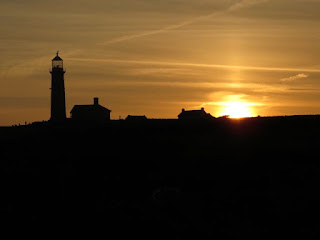 6 to 13 June – images from Richard Campey


Posted by Richard Campey at 14:26 No comments:


A glorious week on Lundy which started with a Red-veined Darter near Pondsbury, which we think is a first for Lundy, from photographs Richard captured and identified by Tim Davis and Tim Jones. This was followed by Tim Jones seeing a female Teal on Pondsbury, but instead of just a single bird sighting it was accompanied by four ducklings, a first breeding record for this species on the island. And finally on the last day, on the way down the beach road to catch the Oldenburg Richard had a first for his Lundy list in the shape of a Black Guillemot which had been absent for well over a week. This great bird was sitting on the rock just south of Miller's Cake.

Posted by Richard Campey at 18:04 No comments:

News from Tim Jones and Tim Davis that the Black Guillemot resurfaced on the afternoon of 13th and was present again on 14th. Also Stock Dove, 2nd calendar year male Cuckoo and 2nd calendar year Grey Heron, 2 Cormorants and 20 Swift on 13th.

On 14th there was a 2nd calendar year Rose-coloured Starling around the village and a small arrival of late migrants included 3 male Blackcaps, several Chiffchaffs, a singing Willow Warbler, a female Whitethroat and a Spotted Flycatcher. The Grey Heron, Cuckoo and Stock Dove were still present. A trickle of Swallows and House Martins were continuing to move north and a second Grey Heron flew through high NNW.
Posted by Chris Dee at 22:31 No comments:

Friday 12th June started with cloud and a North-Easterly breeze. St Philip's Stone was relatively sheltered, just the occasional cat's paw on the flat sea. I must have been around low tide and small groups of Guillemots stood on rocks near the sea. Other scattered auks rafted on the increasing clear blue sea. Three to four Gannets patrolled in the distance.

This was my first trip to my Guillemot survey ledge for 5 days. When I'd last visited on Sunday 7th June there were potentially 15 birds sitting on eggs. Some of them have had egg since 13th May so I was expecting them to start hatching any day. One Guillemot joined other birds the ledge at 06:35am while I was setting-up the video camera. By the time that I'd trained the telescope on the ledge, there were 32 birds sitting, preening, flapping and jostling.

Small changes in behaviour were encouraging. Most incubating birds were hunched forward over their eggs, but the adult on site E was more upright and it had its head down as if it were looking at an egg or a chick. Guillemots regularly turn their egg to ensure an even incubation temperature, and this happens frequently when an the chick is trying to break free from its shell. Guillemot chicks and their parents also call to each other during hatching. The chick learns to recognise its parents distinctive calls at this time.

06:48am. The pair of birds at site M were mandibulating a large piece of eggshell. They'd lost their egg last week, so it could have been an eggshell from a neighbouring pair: either from site N to their right, or from sites C, D or E above them. The adult at site N was sitting with drooping wings, which can be a sign that the bird has something precious that it wants to protect. This also happens when they first lay their egg, and an adult with one wing drooped can be brooding a chick under that wing.

06:51am Pair JJ mating, usually a sign that they have no egg.

06:53am While watching the site N adult, I saw disturbance its right-wing secondary feathers. This could be head movement from a brooded chick.

06:57am Site N chick seen. Initially just its beak (with egg tooth visible) was seen under the adult. To mark the 50th anniversary of the Landmark Trust, I'm naimg this year's chicks after Landmark Trust properties. Chick N will be "Nicolle", after Nicolle Tower in Jersey

07:03am Site D adult "tenting" - this is were the adult stands and partially opens its wings to protect an egg or chick. Tenting is often seen when an adult is attempting to feed a chick.

D and O adults interacting with their eggs or chicks

07:24am B adult interacting with egg or chick

07:28am Adult flew into site N with a fish. Nicolle not hungry.

07:29am More eggshell under adult D

07:55am Adult flew into site S without a fish. One of the site E adults flew out after 41 minute on the ledge.

08:02am Puffin landed on the next headland (Seabird Colony Register F5) with fish in its beak and went into a burrow. This is the first reported feed of the year.

My laptop is broken so I haven't been able to process the video. I'll post some pictures when it's fixed.
Posted by Unknown at 11:28 No comments:

Tim Jones and Tim Davis report a quiet few days for birds. One hundred Puffins were counted on land in Jenny's Cove on the 10th. Up to three Collared Doves were present with singing noted in Millcombe and sightings as far north as Halfway Wall. Two Swifts were recorded on 11th. The Black Guillemot has not been seen sine 2nd June, so seems to have departed. Water Rail has been proven to breed again this year with a chick heard to call near Quarterwall Pond on the evening of 8th.
Tim and Tim also report plenty of success reading Wheatear colour rings from a breeding study being carried out on the island.
Posted by Chris Dee at 09:36 No comments:

Tim Jones and Tim Davis have provided this update, following a very bumpy crossing from Bideford on the 6th.
A single Spotted Flycatcher was in Millcombe on 6th and 7th alonmg with two singing Chiffchaffs. A (silent) Willow Warbler was on the terraces on the 6th. A steady northward passage of hirundines on 7th included at least 64 Swallow, 16 House Martin and 2 Sand Martin and there were also 4 Swift. A female Black Redstart was in Gannet's Coombe on 7th and a Grey Wagtail was an unusual June record.
In Jenny's Cove, there were 90 Puffins on land. The first ever breeding of Teal was recorded with a female and four ducklings on Pondsbury and nearby breeding was also confirmed for Stonechat (the first since 2009).
On the 8th there was a Snipe at Tibbetts Pond, a Sparrowhawk at the South End and a Hobby seen from the Upper East Side Path. There were also three Collared Doves in Millcombe.