The Marisco Tavern is now draped in decorative garlands and sparkly tinsel, twinkling fairy lights illuminate the window of the General Stores, and more and more Christmas packages, ready for wrapping, are arriving on the bi-weekly helicopter service. It’s beginning to look a lot like Christmas on Lundy!
Other than mass festive decorating, Lundy staff have been keeping very busy with lots of other bits this period, including socially distanced training for the island's Coastguard and Fire Service teams, fixing leaky windows and repairing drystone walls, lots of digging to facilitate new drains around the Village, and cracking on with end-of-season reports and reviewing applications for next year’s volunteer positions.
Regarding the latter – if there are any bird brains out there who would like to contribute to the island's seabird, seal and migratory bird studies – we are now looking for a number of long-term volunteers to come and spend some time with us on the island during the 2021 season! If this is something you might be interested in, please pop over to the Lundy Landmark website to find out more:
https://www.landmarktrust.org.uk/lundyisland/get-involved/volunteering/volunteers-long-term/
Weather-wise, it has been a wet and windy affair – as you’d expect from the month of December. In fact, the island is now sodden due to several days of heavy rain, which has resulted in lots of puddles and pools forming in various spots, as well as the return of the temporary Ackland’s Moor Marsh which is currently filling up nicely, to the joy of the visiting gulls.
With the late sunrises, early sunsets and heavy cloud cover, particularly in the mornings, it’s been a rather gloomy period but again, like the autumn, we have been spoiled with one or two beautiful 'red sky' mornings warning us of an approaching chill and foul weather to come.
Unsurprisingly, being mid-December, the birding has been rather quiet on the island. Saying that though, there have been a few smashing birds to keep us going until the spring. Highlights included a juvenile Glaucous Gull roosting in various in-fields throughout the day of the 11th – a bird that allowed some superb views, particularly in Tillage Field in the afternoon. 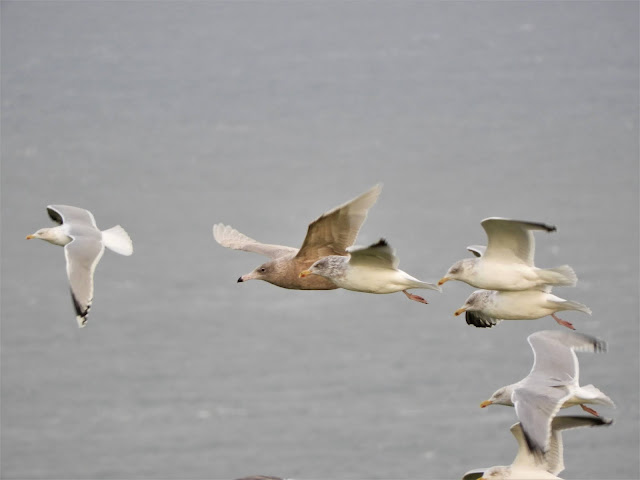 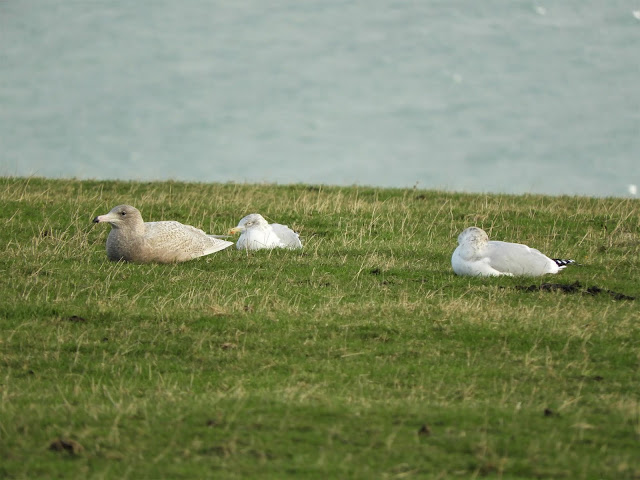 Other highlights included a stunning Purple Sandpiper which was photographed by visitor Jonny Morgan up on top of the island along the west on the 11th, a lone Snow Bunting sheltering from the strong winds on the Main Track by Quarter Wall on the 6th, two late Manx Shearwater were foraging offshore along the east on the 11th and 16th, as well as the odd Mediterranean and Common Gull on the 7th. Finally, a Great Northern Diver was in the Landing Bay on the 17th and a single Firecrest and the lingering Coal Tit were seen and heard off and on in Millcombe at the start of the period.
With Christmas just around the corner, I would like to take this opportunity to say a massive 'thank you' to everyone who managed to visit and support Lundy this year and of course, all those who submitted any wildlife sightings whilst on the island. Thank you all so much! I hope everyone has enjoyed reading the blog this year as much as I’ve enjoyed writing parts of it (a huge thank you to Tim Davis and Tim Jones for managing the site). It really has been a stupendous year for Lundy birds with ever-increasing seabird numbers, some stonking rarities like Killdeer, Bridled Tern, Sora Rail, White-tailed Eagle and White’s Thrush and of course, like always, all the amazing birders, bird ringers, researchers and general wildlife enthusiasts who managed to get over to the island this year!
The Conservation Team wishes you all a festive, love-filled Christmas and a very Happy New Year. Hope to see you all on the island during 2021!
All the very best,
Dean Woodfin Jones
We'd like to send our own festive greetings to all readers of the blog – we know that there are a lot of you out there! We'd especially like to thank Dean for his heroic efforts in keeping up the flow of bird and other wildlife news from Lundy throughout the trials and tribulations of 2020, enabling all of us to share in the reassuringly familiar rhythms of nature's calendar on our favourite island, even when we haven't been able to visit in person. Merry Christmas and all the best for a happy, healthy, peaceful and bird-filled year ahead.
Tim & Tim
Here are just a few of the birding highlights from the last 12 months...