Despite the wind swinging round to the north, new migrants had arrived on the island overnight. Until handing over to Rob Duncan who will be on the island for the next two weeks, Chris Dee managed to ring a further 61 birds, including 30 Willow Warblers, 14 Blackcaps, 9 Chiffchaffs 3 Sedge Warblers, a Redstart, a Whitethroat and a Reed Warbler. The British-ringed Reed Warbler from Thursday was also recaptured. At least one Green Sandpiper was still present and as M S Oldenburg disgorged her passsengers, a Little Egret was flushed from below the Beach Road and flew up into Millcombe. After spending a while in the pond it retreated to the lawn of Millcombe House. Rob reports that by the end of the day the ringing total had reached 85. 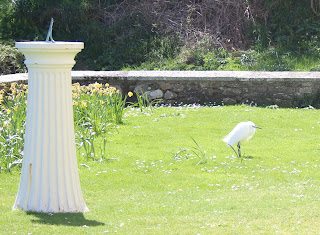