A generally rather quiet day, with a stiff easterly wind again dropping away to virtually nothing during the late afternoon to give a jaw-droppingly gorgeous sunny and still spring evening. Among the rather few notable observations were a second calendar-year Black-headed Gull that flew through the Landing Bay first thing, nine Dunlins in Middle Park, a Collared Dove sitting on top of Lametor, and three Swifts.

A cloudy and at times quite raw-feeling day with some light rain for a time mid-morning, when the cold E or NE wind was quite strong, but backed NNE and became much lighter during the afternoon, though it remained heavily overcast, subduing insect and bird activity alike.

A Great Northern Diver flew north up the East Side of the island at plateau height at 06.45 and a pale-phase Arctic Skua was harrying Kittiwakes off Rat Island around midday. A Garden Warbler performed its rich song for prolonged periods, often at the same time as feeding in sycamores in Millcombe. Also of note were two flyover flava wagtails, and eight Spotted Flycatchers.

A cloudy but virtually windless dawn, gave way to a stunningly beautiful spring day with warm sunshine breaking through by late morning.

Tim Davis and Tim Jones experienced one of their all-time highlights of decades of birding on Lundy when they were lucky enough to spend several hours in the company of a beautiful male Red-footed Falcon. Initially encountered in northbound flight over heathland near Pondsbury, the bird moved on rapidly to Middle Park and disappeared towards North End. The by-now very out-of-breath observers, having run in a seemingly vain attempt to keep up with the falcon, arrived at the vantage point offered by the mound near Threequarter Wall Gate in time to see it disappear towards Gannets' Combe. Resigned to the likelihood that the bird would simply continue moving north and off the island, it was almost unbelievable when it suddenly flew in and perched on a reasonably nearby granite outcrop. The falcon then took up residence for a good three hours on and over the slope between Tibbetts and Threequarter Wall Gate, where it pursued and consumed numerous (probably 50+) Emperor Moths, treating the Tims to a mind-blowing display of graceful aerobatics. A red-faced and sweaty Lundy Warden, Dean Woodfin Jones, hove into view having belatedly received a series of frantic WhatsApp messages, in time to join in the visual feast, along with two lucky day-visiting birders. There have been seven previous Lundy records of this delightful Eastern European raptor, the most recent in May 2003.

The series of record shots below indicate that this bird was an immature, presumed second calendar year, given the extent of underwing barring. At close range some brownish smudging could be seen on the nape. 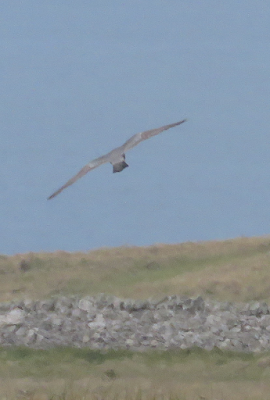 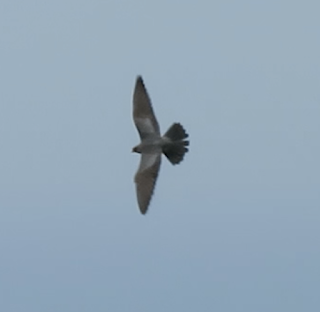 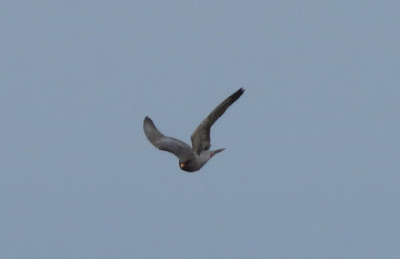 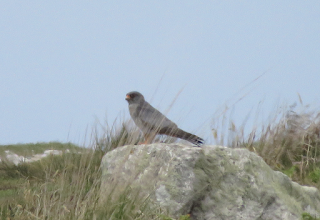 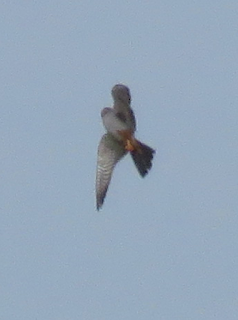