A pair of Golden Plovers in Tillage field.

Walking back from the North end we spied a pair of Golden Plovers in Tillage field. 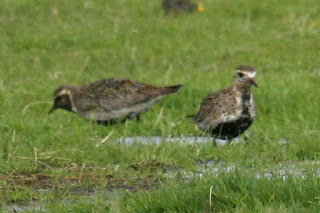 Grant Sherman's surveys of the seabird cliffs on the island include:

"1245 Guillemots on my survey ledges this morning. A lot of birds sitting hunchbacked on the St Philip's Stone sites (presumably sitting on eggs). Not as many on the Jenny's Cove sites - however I did get a photo of this egg.   13 Puffins on the land and 5 on the water at St Philip's Stone. 35 Puffins on the land and at least 10 on the water at Jenny's Cove  around 4 or 5 hundred Razorbills but I didn't do a proper count.   Some Kittiwakes were collecting grass and turf for nest material. "
Posted by Richard Campey at 07:16 1 comment:

For news of the Devon Birdwatching & Preservation Society's "bracing" daytrip on 12th May – including the first Dotterels of the year – visit the Devon bird news website http://www.devonbirds.org/news/bird_news/devon_bird_news

In other recent news from the island, a Hoopoe was reported in the first week of May and the remains of a Golden Oriole, perhaps the same bird reported towards the end of April, were found on 8th.
Posted by Tim Jones at 21:51 No comments:

Some regular readers of this blog may already be aware that James Leonard, denizen of the Radio Room and indefatigable contributor to the Tavern logbook, passed away on 28 April after suffering a stroke. For the past decade, James was a frequent visitor to Lundy, often to be encountered birdwatching around Millcombe and latterly – since the arrival of his mobility scooter – more widely about the island. His final voyage from Lundy back to his North Devon home was on 18 April; it is hard to believe that this larger-than-life character and his instantly-recognizable handwriting (pencil only!) are gone forever. The end of an era indeed.

April 27th -29th was mostly dominated by northerly winds, cool and cloudy. The large number of Willow Warblers ringed earlier in the week were soon gone, replaced by a slow but steady trickle to the end of our stay on May 4th.  Nights became clear, and few migrants stayed long. Chiffchaff, Whitethroat, Sedge, Reed and Grasshopper Warblers were noted in single figures. Hirundine passage was modest, one Redstart but no Flycatchers or Swifts were seen, whilst Siskin, Goldfinch, Linnet and Meadow Pipit flocks were small and few. Wheatears (with a small proportion of Greenland) kept up a steady flow, and some began to assert territories. Pied Wagtail, Blackbird, Robin, Starling, Wren and Linnet were all noted food-carrying. Singles of Dunlin and Turnstone were seen over the Landing Bay, Whimbrel were recorded most days, and one of two Great Northern Divers remained for several days. The highlight was a female Goshawk over the terraces on May 2nd.

Highest count for Puffins was 67 on May 2nd and probably represented more than 70. Later that day 150 Shags congregated around Common Dolphins off the West Side, but then did not follow them. Only a handful of other seabirds joined the gathering, although plenty were within sight.

Posted by Richard Campey at 08:06 No comments: